January 23, 2020
Microsoft recently released their SDK and Emulator for developing dual screen applications for the Surface Duo (https://docs.microsoft.com/en-us/dual-screen/introduction) and being a bit curious about what the experience was going to be on a dual screen device I decided to give download it and give it a try.

First and foremost there is the novelty of having two apps launched side by side. 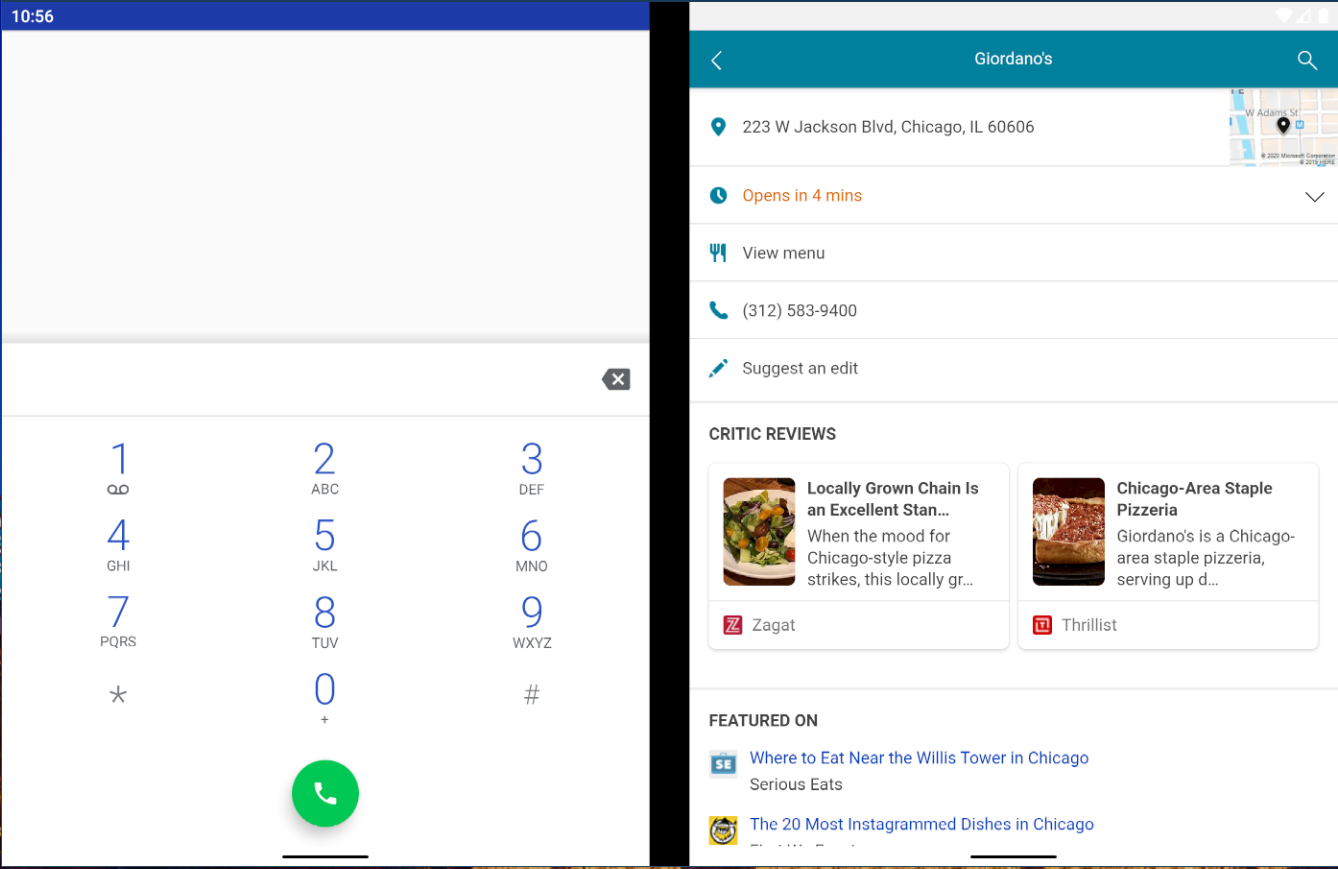 The Duo emulator is using Android Version 10 and to be API version 29, both are the latest versions of Android. 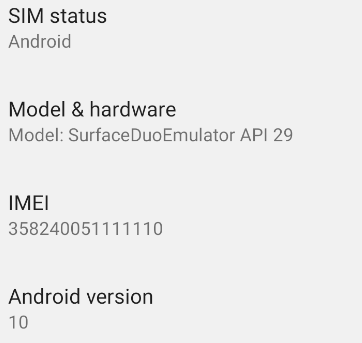 There is no Play Store or Microsoft Store on the emulator, which is to be expected as its main purpose is app development. But beyond that it appears that most of the Google applications are not included in the device and the build is based off the Android Open Source Project (AOSP) more than anything else. What typically are the default applications on Android have been replaced with Microsoft Applications. 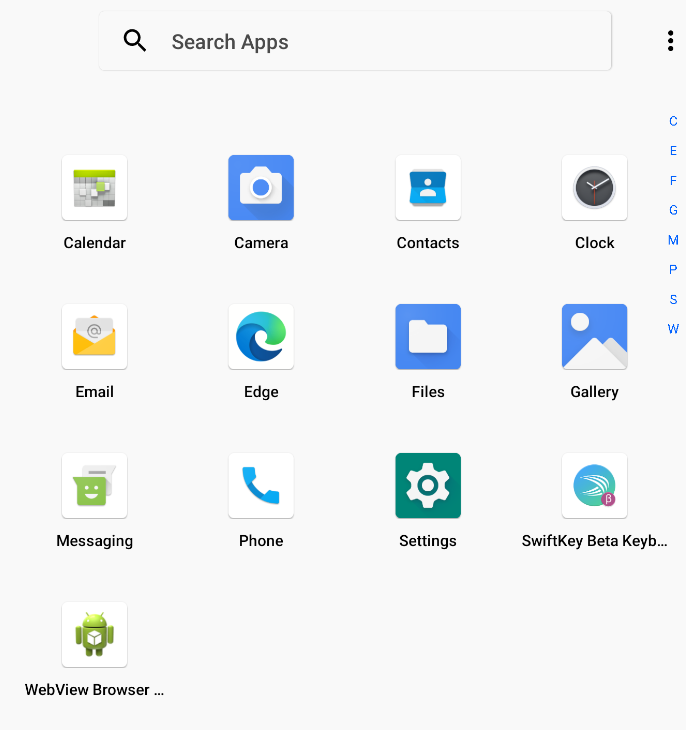 The single panel user experience is exactly what you'd expect from any Android Device. By default gesture navigation is enabled and changing back to 3-button navigation actually causes some navigational issues. Microsoft did update visual instructions for gesture navigation to the dual screen form factor.

In addition to the standard gesture navigation you can actually use the recent apps panel to drag and drop applications do different screens.

One final note about the UX is the application dock actually moves when you open up an app. by default the 6 applications you've added to the dock are spread across the 2 screens. Once you open up an app on one of the screens the docked apps will actually slide over to the other screen and slide back when you go back to the home screen.

The emulator appears to based of same Android Emulator you get when you download the SDK or Android Studio on your machine which makes it familiar and easy to get started with. 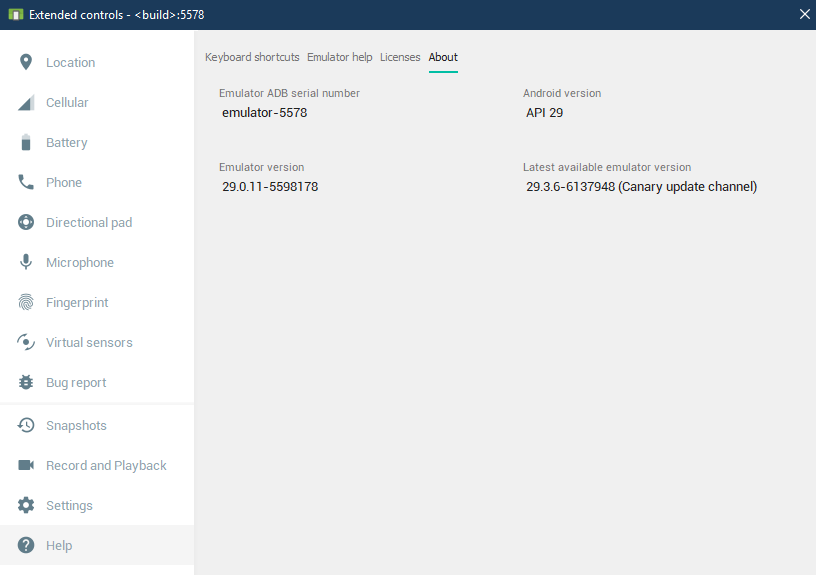 If you want to enable things like freeform windows, force desktop mode, and force activities to be resizable or any of the other experimental features they actually will not work, which is a bit of a disappointment but not unexpected.

Overall I'm impressed with the overall UX of the device and the level of thought that went into even the smaller details such as moving the docked icons over when you launch an app and even updating the visual guide for gesture navigation and I am excited for more to come.

Popular posts from this blog

February 26, 2019
Update Aug 15 2019 - Microsoft has updated PowerApps to allow for some complex SharePoint data delegation, this will hopefully resolve most issues you were seeing when working with SharePoint data:  https://powerapps.microsoft.com/en-us/blog/sharepoint-delegation-improvements/ If you've tried to use the Filter, LookUp or Search actions in PowerApps you have seen the yellow warning error that shows a 'delegation warning' and you might have even ignored it because your PowerApp was working fine in testing. However once you get into larger data sets your PowerApp will have some issues so in this blog I will attempt to explain what the delegation warning is and how you can fix your PowerApp. Delegation So what even is Delegation in PowerApps? When doing any sort of data manipulation for an app, PowerApps will try to push the processing of that data to the source system instead of doing all of the manipulation in the app. This is done to increase the efficiency of you
1 comment
Read more

February 11, 2019
Every week I'll be posting a quick summary of O365 updates included in the admin weekly digest email that you can sign up for via the admin Message Center:  https://admin.microsoft.com/AdminPortal/Home#/MessageCenter  -these emails include items posted to the message center over the last week and come out every Monday. The headline feature this week are the changes to Modern news pages in O365 and the concept of "Organizational News" (Roadmap ID: 30547) rolling out in Q2. Deem a specific site as the main news site (Roadmap ID:30694) Audience Targeting for News (Roadmap ID:30695) Support for Mobile News (Roadmap ID:33469) Ordering of news articles (Roadmap ID:44212) And if your following the road map, which you should be, you will be seeing some new update rolling out over the next 2 months.  Next there are a few reminder alerts that I've talked about previously, the enhancements to open Word and PowerPoint files faster when they are saved to OneDrive
2 comments
Read more